Where the term VOTE MALETM came from

Gee Patty, how big a death gap will it take to make you happy? 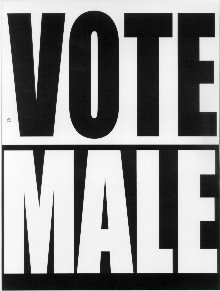 The Seattle Post Intelligencer ran a front page article about Washington State Senator, Patty Murray. The story tells how senator Murray demanded on the floor of the US Senate that women's health care issues "not be forgotten or swept under the rug." She went on to say "I will be watching and working to make sure this does not happen." The article further goes on to point out that Senator Murray "said one culprit is the male-dominated political system that has not provided enough money for research of women's illnesses."

Senator Murray's comments seemed a bit absurd. How could she complain that the "male dominated" system has short changed women's health issues when women live significantly longer than men? So what has the "male dominated" system done? How exactly have women been victimized? Isn't the death gap between the sexes big enough now? How big of death gap is necessary in order to make the female vote happy? Does Ms. Murray ever represent the rights of her male constituents? Isn’t this just another example of male bashing?

I brought Ms. Murray's health care perspective up with friends. The consensus was, either Ms. Murray was politically grandstanding for the female vote, and/or she was ignorant of the facts. At a minimum, she had demonstrated a complete lack of sensitivity to us males who would like the opportunity to live as long as women.

Our response was the phrase, "Gee Patty, we'd like to live as long as you. Why don't you 'vote male' once in a while?" And hence the expression "vote male."

Where the Vote MaleTM artwork came from

After coining the expression Vote Male, I was working with a friend on the computer. We experimented with VOTE MALE in a number of different font styles and sizes. We eventually came up with the black and white image. We liked the look and thought the image had a lot of impact.

The next step was to test the logo. We displayed the image a number of times. Every place we showed it we got the same results - folks couldn’t ignore it.

We had T-shirts, hats, sweat shirts and buttons made up. On the first day that our sweat shirt with logo appeared in public, (at a union meeting that already had press coverage) it appeared on the evening news. The man that wore it later received hate mail that mentioned the logo.

We set up a booth at a few street fairs. In Seattle, at a Sunday street market, an feminist extremist went ballistic. She yelled obscenities at us and called us "misogynous patriarchal bastards." She then attacked our booth and started to throw our hats all over the place.

We knew then that this logo had a lot of visual punch.